Chapter 11 – GDP and the Government Budget

“India is set to report strong growth this fiscal, to cross 7% GDP by FY24”

Indeed, you must have come across these headlines.

What do all these percentages stand for? But most importantly, what is Gross Domestic Product (GDP)?

Simply put, GDP is the value of goods and services produced in the country in a financial year. It is an essential tool to estimate the size and growth of an economy.

This GDP can also increase if more goods and services are produced, or it could even increase due to inflation.

So, how do you know if a country’s GDP is actually growing or falling?

It is true that the growth in GDP due to inflation is not the kind of growth a country must seek.

And that’s why you need to know the Real Economic Growth Rate of the country during a particular period.

Now, what is Real Economic Growth Rate and how do you calculate it?

Real economic growth rate or real GDP growth rate can be measured by a change in the value of goods and services produced, keeping the rate constant equivalent to the base year.

Let us understand this with a hypothetical example:

Assuming that our economy only produces two goods - computers and wheat.

This can give you an overall picture on the country’s economic growth.

Although we spend most of our waking hours online, digital goods and services go largely uncounted in GDP. That’s because digital services like Google, Wikipedia and many others offer services/information at no charge.

February is a very important month for the country.

Of course, because it could be the month of your birthday. But another, even more important reason is because on the 1st of February, the Government of India presents the annual financial statement known as The Union Budget for the following financial year.

It is a statement of estimated receipts, which is the income or the revenue and expenditure of a government for an upcoming financial year. The major highlights of the budget are personal income tax rates, financial deficit target, policies related to various industries, subsidies and so on.

The objective of the Union Budget is to bring about a balanced economic growth of the country.

And to do so, the ideal scenario would obviously be that the revenue is higher than the expenditure which is also known as the surplus budget.

But that’s not usually the case. Sometimes expenditure can surpass the government’s revenue, especially in developing economies.

Let’s look at the government’s major sources for earning revenues:

And below is a diagram of the government’s expenditure:

Let’s look at an illstrative representation of the account of sources of the receipts and their expenditure presented in Union Budget 2021-22. 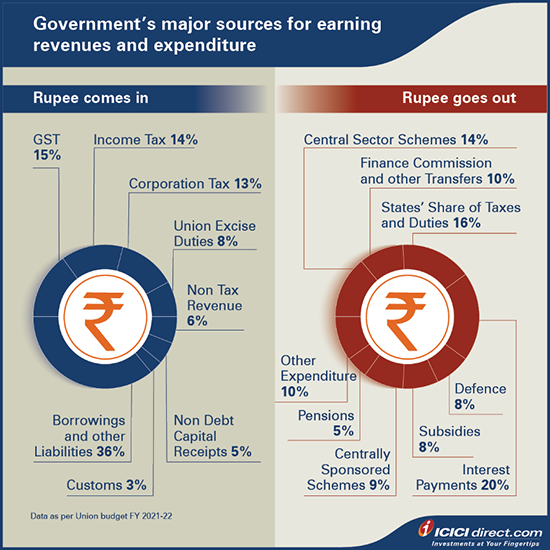 So, what happens if the expenditure is higher than the revenue (or the income earned)?

Fiscal deficit is the difference between the total revenue and expenditure of a government in a financial year.

Fiscal deficit is the difference between the total revenue and expenditure of a government in a financial year.

In India, the FRBM (Fiscal Responsibility and Budget Management) Act suggests bringing the fiscal deficit down to about 3% of the GDP as the ideal target.

How does the government manage its fiscal deficit?

The government decisions related to subsidies can also impact expenditure and accordingly affect fiscal deficit. If the government decides to increase subsidy amounts, it can widen the deficit gap.

That sounds like fiscal deficit is bad for the country, isn’t it?

Well, not really. A high fiscal deficit is not bad all the time.  Sometimes, it can also boost economic growth and lead to the creation of new jobs.

What does the government do in case of a budget surplus?

In that case, the government spends it on public welfare in the form of subsidies. They can allocate it to public debt to reduce interest rates on loans and help build the country’s economy.

We know that the country’s economic growth also depends upon its relationship in the form of transactions with other nations.

But how does a country maintain all transactional records with other nations?

Every country maintains a Balance of Payment (BoP), which is a systematic statement of all economic transactions of a country with the rest of the world during a specific period, usually a year.

Current Account: It records exports and imports in goods, trade in services and transfer payments.

Capital Account: It records all international purchases and sales of assets such as money, stocks, bonds, etc. It includes foreign investments and loans.

The following chart may help you understand the difference between the two. 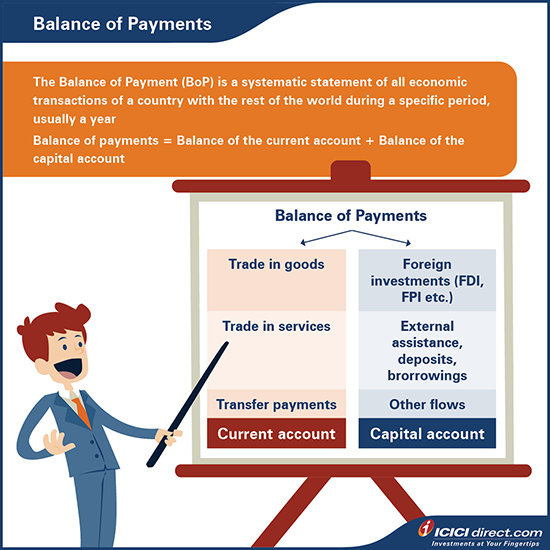 Let’s look at how payments are recorded in the current account:

Here’s another example to help you understand better:

India imports steel from South Korea for $4,000. This means India is obliged to pay South Korea for the goods i.e., steel. Since the payment is going from India to South Korea, it will be recorded as -$4,000 in the BoP under trade in goods.

This is vital to understand because when a country's import of goods, services, income or transfer of money (individual or business) is more than the export of the same, it can cause Current Account Deficit (CAD).

Why is it essential to keep CAD under control?

CAD has the potential to impact the nation's currency. A higher CAD could negatively impact the currency and lead to a sharp fall in its value. However, it is important to know that India’s capital account mostly remains positive due to heavy inflow of the money. Since CAD is mostly less than the surplus in the capital account, it keeps the Balance of Payment (BoP) positive.

India's CAD had hit its record high of 4.8% of GDP in the financial year 2012-13 due to rising gold and oil imports. This impacted the rupee at that time, causing it to depreciate rapidly.

A country with rising CAD may be viewed as weak on the economic front. This also looms the risk of a credit rating downgrade if the situation moves out of control. Rising CAD may also lead to withdrawal of foreign investments and cause a fall in the capital account.

Additional read: The Relation Between the GDP and Stock Market that We Need to Know

Just as we promised, this chapter swept like a breeze! Let's glide to the next chapter which will introduce you to the basics of Foreign investments.

Disclaimer: ICICI Securities Ltd.( I-Sec). Registered office of I-Sec is at ICICI Securities Ltd. - ICICI Venture House, Appasaheb Marathe Marg, Mumbai - 400025, India, Tel No : 022 - 2288 2460, 022 - 2288 2470. I-Sec is a Member of National Stock Exchange of India Ltd (Member Code :07730) and BSE Ltd (Member Code :103) and having SEBI registration no. INZ000183631. Name of the Compliance officer (broking): Mr. Anoop Goyal, Contact number: 022-40701000, E-mail address: complianceofficer@icicisecurities.com. Investment in securities market are subject to market risks, read all the related documents carefully before investing. Composite Corporate Agent License No.CA0113, AMFI Regn. No.: ARN-0845. PFRDA registration numbers:  POP no -05092018. We are distributors of Insurance and Mutual funds, Corporate Fixed Deposits, NCDs, PMS and AIF products. We act as a Syndicate, Sub -syndicate member for IPO, FPO. Please note that Mutual Fund Investments are subject to market risks, read the scheme related documents carefully before investing for full understanding and detail. . ICICI Securities Ltd. acts as a referral agent to ICICI Bank Ltd., ICICI Home Finance Company Limited  and various other banks / NBFC for personal finance, housing related services etc. & the loan facility is subjective to fulfilment of eligibility criteria, terms and conditions etc. NPS is a defined contribution plan and the benefits would depend upon the amounts of contributions invested and the investment growth up to the point of exit from NPS. Insurance is the subject matter of solicitation. ICICI Securities Ltd. does not underwrite the risk or act as an insurer. The contents herein above shall not be considered as an invitation or persuasion to trade or invest.  I-Sec and affiliates accept no liabilities for any loss or damage of any kind arising out of any actions taken in reliance thereon.The non-broking products / services like Mutual Funds, Insurance, FD/ Bonds, loans, PMS, Tax, Elocker, NPS, IPO, Research, Financial Learning etc. are not exchange traded products / services and ICICI Securities Ltd. is just acting as a distributor/ referral Agent of such products / services and all disputes with respect to the distribution activity would not have access to Exchange investor redressal or Arbitration mechanism.